When paddling, I find it helps appreciating the scenery if you know some of it's backgrounds. Dutch children already learn some of the history of our country at elementary school, I'll try to provide some here for you to catch up.

The western part of The Netherlands that is known as Holland was formed as the delta of the rivers Rijn (Rhine), Maas (Meuse), Schelde (Scheldt) and a few other minor rivers. All these laid down clay sediments along their beds, and frequently shifted their paths. Between them there was a landscape of wetlands and peat marshes while a band of sand dunes was formed along the coast.

The first inhabitants of the wet areas chose suitable places to stay, and started digging peat to be used as fuel when dried. This digging of peat continued until after the middle ages, and resulted in quite a few lakes that grew as the shores were washed away during storms. 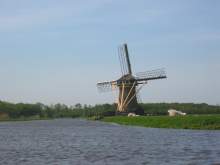 A typical Dutch windmill
While this was going on, people also started to change the land to suit their needs and to provide some security against the water. At first ditches were dug to drain the higher parts, but later small patches of wet land and marshes were enclosed with dikes and pumped dry. Canals around the outside of the dikes were used to move the water away. From the midddle ages the pumping was done mainly by windpower, and although many are now defunct or demolished there are still quite a few windmills present. Later, as the population increased there was more need for dry land, and as the industrial revolution progressed, larger marshes, former peat lakes and even parts of the inland sea "Zuiderzee" were converted to dry land by means of steampower and electric pumps. Some parts were more difficult to pump dry and still many lakes and wetlands remain.
The last major lake to be drained was the "Haarlemmermeer" southwest of Amsterdam, in which now our national airport Schiphol lies (literally "Ship's hell", a particularly nasty corner of this large lake where many ships sunk).
During the 1920's plans were made to convert a major part of the "Zuiderzee" to dry land, the work was completed in the 1960's. Fortunately part of the original plans were not executed due to a shifting attitude towards nature preservation and the recreational values of open water.
The areas of land thus formed are called "Polder", and most if not all still require pumping to keep the water out.

Aside from this, there is also the extensive dike and dam system along the rivers and coast that protects us from flooding. This protection has not always worked, in 1421 large parts of the land were flooded, remnants of which still are visible in the "Biesbosch" (meaning "Reedwood"), a fairly large maze of tidal waterways and land (and now a very nice paddling area), and more recently in 1953 where 1800 people perished when dikes bursted during exceptionally high tide combined with a storm. A large project was started afterwards to reinforce the dikes and to dam some of the sea arms that form the delta.

The organisation for maintaining the polders is still in place and is probably one of the oldest democratic structures in the world. All inhabitants of land behind dikes pay a special tax to this authority, but are also entitled to elect members of it's board.

On maps and in the landscape itself you can easily recognise the networks of ditches and canals that form the drainage system of a polder.

Just as the Inuit people have 60 different words for "snow", the Dutch have many words for waterways of different types and uses. Because of this I will have to use the Dutch terms at times.

The small sample (from my "Noord-Aa en Geerpolder" page) at the right shows a typical patchwork of polders about 15 kilometers east of The Hague. From top to bottom there are three of them, the "Blankaartpolder", the "Drooggemaakte Geer- en Kleine Blankaardpolder" (or in short "Geerpolder") and a part of the "Zoetermeersche Meerpolder" (one of the oldest, dating from 1630), but in fact also the patches of land left and right are also part of several polders.
Within these you can recognize the fairly straight ditches for drainage that are called "Tocht". These are actually the main arteries of a fine mesh of smaller ditches (called "Sloten" and "Greppels") that are not shown on this map. 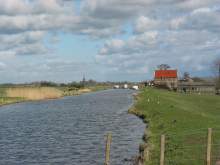 Ommedijksche watering looking NE
The canals that are used for moving the water away are called "Watering" in this part of the Netherlands. These actually lie between two dikes a few meters above the level of the land within the polder, so if you paddle these you'll actually look down on the meadows. You can see this from the altitude figures on the map, the "Geerpolder" is more than 4 meters below sealevel, while the canals are at about sealevel. The photo at the left also shows this quite clearly, it is taken from the road bridge at the most western point of the "Geerpolder" in NE direction. The Geerpolder is at the right.
Some of the buildings (black spots on this map) are pumping stations ("Gemaal" in Dutch), the only one that is named is "De Nieuwe Polder" at the bottom right, the building with the red rooftiles shown on the photo also is one. Modern electric pumping stations hardly have a building and can only be recognized by the "Tocht" leading to them, and sometimes by the remnants of the windmills they replaced. Quite often the lakes were too deep for a single windmill to pump them dry, so gangs of windmills were built where each windmill only had to pump a small heigth for the next one.

The lake at the bottom right is dug fairly recently by dredging sand for building the city of Zoetermeer, and is now part of a recreational area.

And what does this mean for paddlers?

This extensive structure of waterways, lakes and wetlands is very nice territory for paddlers. There are many connected small and medium size waterways that often run through the quietest parts of the otherwise crowded west of the Netherlands. If the number of canoe and kayak rental companies is an indicator of the attractiveness of an area, I know of at least five within a distance of 10-15 kilometers from where I live, two being actually in the area shown on the map above.