This is how I assemble the Klepper Aerius I:
The procedure is not too difficult if you remember that the general order is from the end to the middle and from the bottom upwards. The only aids I use are a foampad to kneel on, and a small pump, but I can do without either.
Some people sort all parts before starting assembly, I myself don't bother and just grab the parts from the piles that come out of the bags.

That's about it. This will normally take me about 15 minutes, or 20 if I take it easy or when lecturing bystanders. Normally I also drop in my homemade footrest (a slotted plastic drainpipe that slides inside over crossrib 2), mount my spraydeck, towrope and a few other minor items.

In principle disassembly is the reverse order of assembly, only even faster. Normally I take my time though, so the boat can dry a little before I pack the bags. I usually leave the boat in it's bags when storing it at home, even when a little damp when packing does not seem to harm the hull. After all the bags are made of canvas and will allow watervapour to pass through. When there's no opportunity to let the boat dry a little before packing I will unpack it at home and lay it out to dry.
I've made an animation of the disassembly sequence, it consist of 20 photos taken at 30 second intervals. It's about 1 Megabyte in size, to see it, click here, it will open in a new window.

To minimize risk of damage you can do the following: 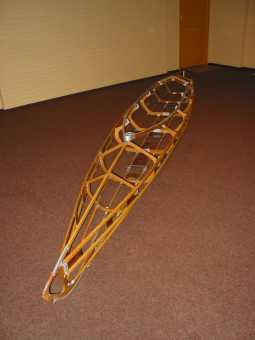 The twoseater frame assembled first time in the hall of my appartment.
I have assisted and watched twoseaters being assembled, and in spring 2003 I was given an old twoseater frame without a skin. The boat itself is from 1955 and has been paddled until the skin leaked beyond repair in about 1990. My first assembly of this frame went surprisingly well, and I initially intended to repair what's necessary and get a new skin for it. After some expert advice I found out that I would need to replace and repair a lot more than I thought, and that all this might end up to be more expensive that a younger and better second hand boat. I've passed it on to the next owner, who intends to make a bookcase out of it for his collection of paddlebooks.
About one year later, I've acquired a reasonably young Aerius Quattro, which I managed to assemble first time in about 20 minutes. Some of this time was due to the fact that the previous owner had packed all frame parts in separate protective bags and sleeves.

The main differences in assembling a twoseater are:

Because the boat parts are bent more gently than in a singleseater they go together more easily, and I guess it will take about the same time to assemble either boat. The only disadvantage you might have is that a twoseater requires a rudder more often, which takes some extra assembly time.